Animations are a great way to help create more dynamic elements on the screen. These use a combination of a script and a sprite sheet (an image that is divided into separate cells where each cell is the same size and part of the animation.

You can think of animations in SplashKit are similar to a flip book, each image in the flip book is displayed for a short amount of time before the next image is displayed. The terminology in SplashKit defines animations in terms of frames, like the frames of a film strip. Frames are setup in an animation script, where they are linked together to define how animations created from the script work. Each frame indicates the part of the image it relates to, the amount of time it appears for, and which frame should follow it when the animation is played.

Animation scripts are not linked to a particular image, that is, an animation script can be applied to any number of bitmaps. This means it’s possible to write an animation to make a character walk and apply it to all your characters in a game, as long as all of those images are setup in the same way. SplashKit also includes code to help simplify animations when used with a sprite, however you can create and play an animation without using a sprite by interacting with the animation directly, a full list of functions and procedures can be found in the API.

This article focuses on the creation and use of animations without using sprites.

As mentioned above, frames are used to control the speed and order of the images in an animation. At the same time, sprite sheet images contain a number of cells. The animation script links frames to cells, enabling you to reuse parts of the image (cells) in multiple ways within your animations. For example you could include a sprite sheet for a character walking and use this with an animation to walk forward and a second to walk back.

The cells within an image are accessed by index, with each cell being numbered from the top left to bottom right (starting at 0). These indexes are used in frames to tell SplashKit what to draw to screen during the duration of the frame. 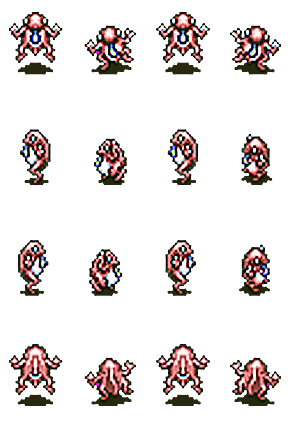 The above frog image gives you an example of a sprite sheet. As you can see this one image is actually a series of smaller images, these smaller images are what we call cells. For example, the first row show the character walking towards the viewer, while the last row show the character walking away from the viewer. To make an animation we need to link these images together in a meaningful way, this is done using an animation script.

Within SplashKit, each frame have an identifier, cell number, duration, and a link to the next frame. They are incredibly powerful and can be linked together in any order to create different animations from the same images.

The identifier of a frame is used by SplashKit to connect frames together into a sequence. The cell number is used by SplashKit to get the part of the image to draw when the animation is playing that frame. The duration is the number of times the animation needs to be updated before the next frame will be played. The next frame is the index of the frame to move to once this frame completes. If this field is omitted then the animation ends after the current frame has finished. 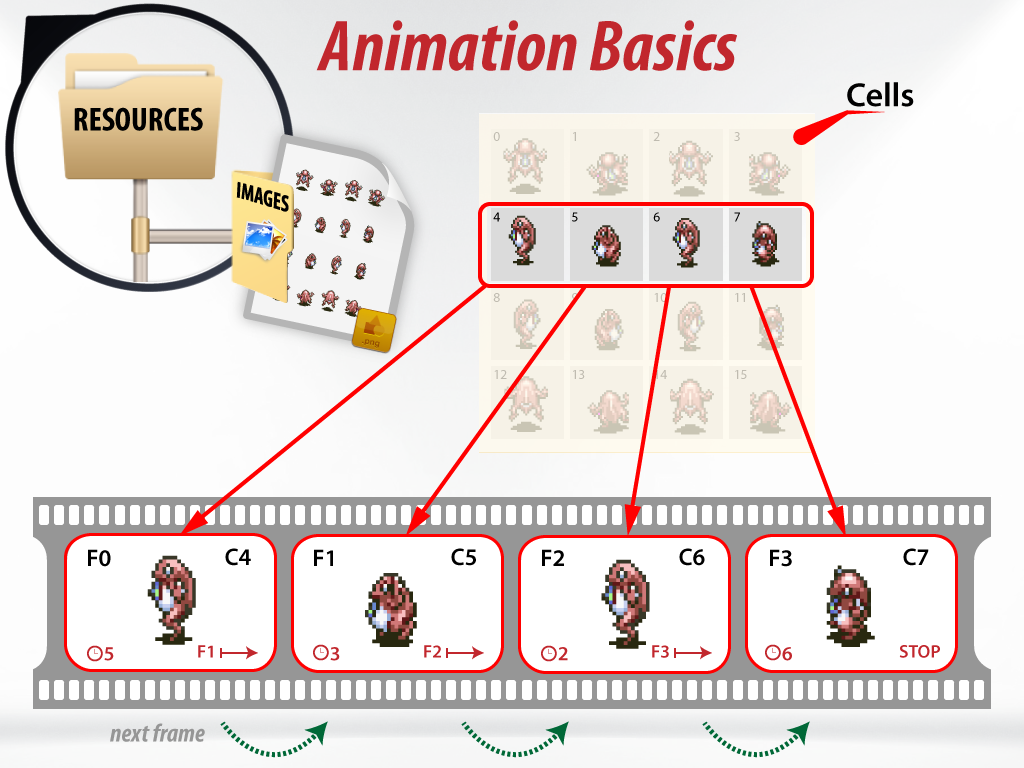 Animation script details are coded into a text file in the animations subfolder of a SplashKit project’s resources folder. The format of this document starts with the text SplashKit Animation and is then followed by the definition of the frames defined within that script. The file has a basic line based format, so each line can be used to define one aspect of the script.

Frames are coded within the animation script file using a line that starts with “f:”. The frame definition records the id of the frame, the cell to draw for that frame, its duration as a number of times to be updated, and the id of the frame that will follow this frame.

The following code is the start of an animation script file. 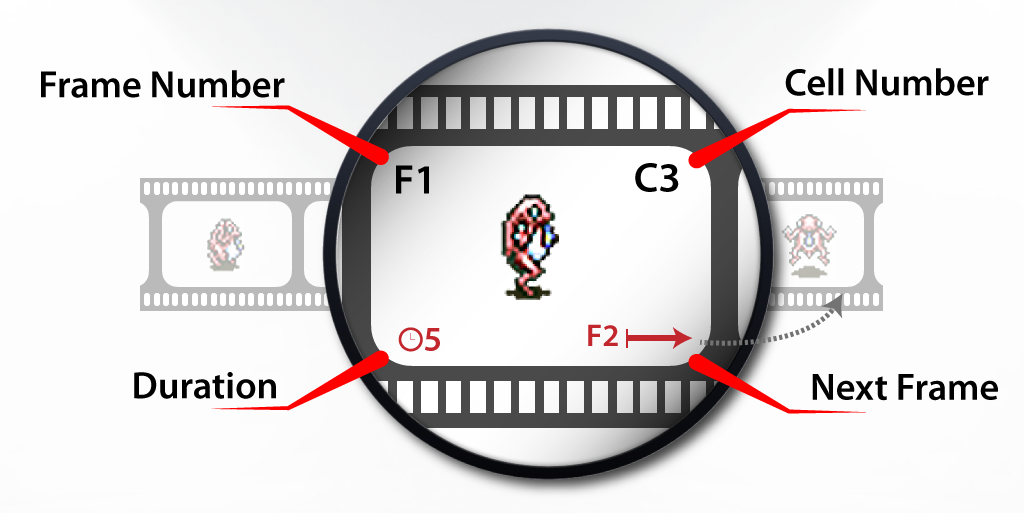 When designing your animation an easy place to start is with a frame per cell in your animation. You can then put in a set duration, and link the frames together. For example, with the Frog sprite sheet you could use the following as a start. This includes frames in four groups, one for each of the different animations within the sheet (as indicated by the comments). Notice that each of these is a loop, so the “toward the user” sequence plays cells 0, 1, 2, 3 and then back to 0.

The next key element of the Animation is a starting point. This is a named frame that signifies the start of an animation sequence. It is coded in the file using a line starting with “i:” followed by the name of the animation (its identifier) and then the starting frame.

Once you have a sprite sheet and an animation script the code to get this working is relatively straight forward. What you need to do is:

This is demonstrated in the following code examples.

To test the above code you can download these resources. This includes sample animation scripts, images, and sounds.

Animations can include points where sounds should be played as well. When sound is played in an animation it is played as soon as the frame starts playing and only plays once for that frames duration. SplashKit will manage the loading of the sound for you (like it does in a bundle).

Sounds are coded with lines starting with “s:”. An example of this is written below, it plays footsteps.wav whenever the frame with the identifier 0 is played. 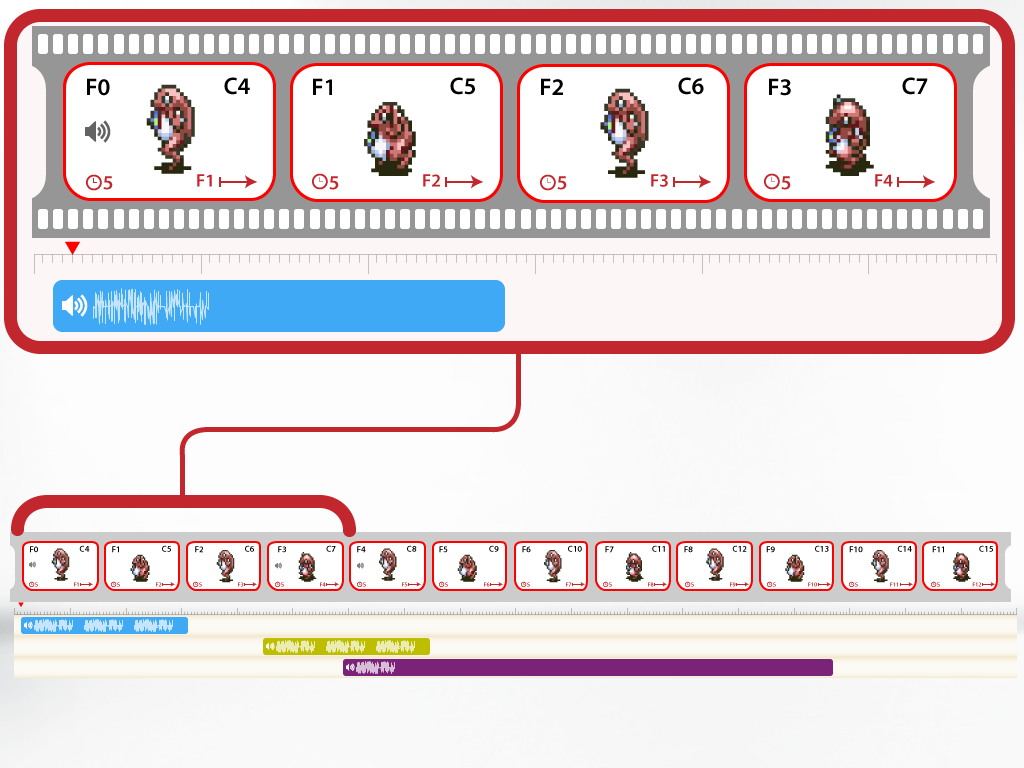 SplashKit animations also includes options to add vectors to individual frames, which are automatically applied when these animations are used in conjuncture with Sprites. This will allow you to apply a velocity vector to sprites when they’re updated. This vector is applied to the current position of the sprite, it is applied every UpdateSprite call, and can be applied manually to an animation. Vectors can be applied to a set of frames using set notation ([low – high]). 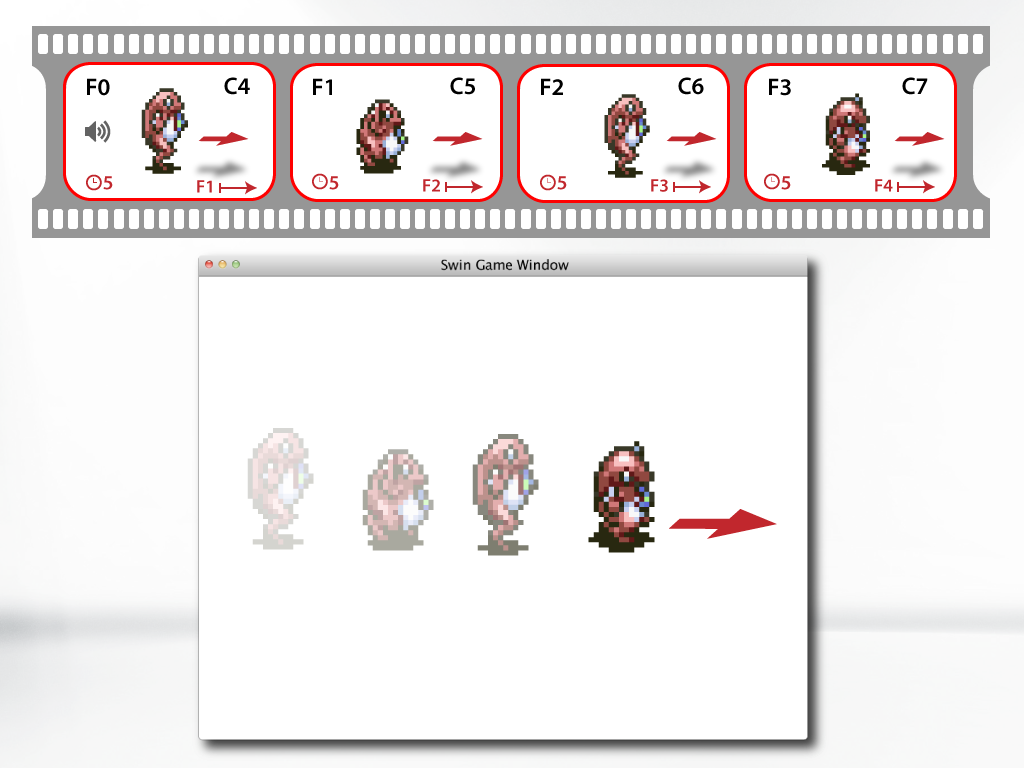